by Gav Thorpe, Guy Haley,  David Annandale and others

Be the first to write a review
Tweet
13%
OFF RRP  $18.00 $15.75
This great value anthology incudes the following stories from some of Black Library's most loved authors: Meduson by Dan Abnett
The Noose by David Annandale
The Keys of Hel by John French
Unforged & Unspoken by Guy Haley
Immortal Duty by Nick Kyme
The Either & The Seventh Serpent by Graham McNeill
Deeds Endure by Gav Thorpe
Grey Talon & The Hand Elect by Chris Wraight Driven almost to the brink of self-destruction at Isstvan V, the Iron Hands now seek vengeance for the murder of their primarch Ferrus Manus. Gathering survivors from the Raven Guard and the Salamanders aboard any vessels capable of warp travel, these Shattered Legions wage a new campaign of annihilation against the traitor forces across the galaxy - a campaign masterminded by legendary warleader Shadrak Meduson. This Horus Heresy anthology contains ten short stories by authors including Dan Abnett, Chris Wraight, John French and many more. Also, in the novella The Seventh Serpent, Graham McNeill revisits the ragtag crew of the starship Sisypheum as they are drawn into a war of subterfuge against the Alpha Legion.

Guy Haley is the author of the Horus Heresy novels Titandeath, Wolfsbane and Pharos, the Primarchs novels Konrad Curze: The Night Haunter, Corax: Lord of Shadows, Perturabo: The Hammer of Olympia, and the Warhammer 40,000 novels Dark Imperium, Dark Imperium: Plague War, The Devastation of Baal, Dante, Baneblade, Shadowsword, Valedor and Death of Integrity.

He has also written Throneworld and The Beheading for The Beast Arises series. His enthusiasm for all things greenskin has also led him to pen the eponymous Warhammer novel Skarsnik, as well as the End Times novel The Rise of the Horned Rat. He has also written stories set in the Age of Sigmar, included in War Storm, Ghal Maraz and Call of Archaon. He lives in Yorkshire with his wife and son.

David Annandale is the author of the Warhammer Horror novel The House of Night and Chain and the novella The Faith and the Flesh, which features in the portmanteau The Wicked and the Damned. His work for the Horus Heresy range includes the novels Ruinstorm and The Damnation of Pythos, and the Primarchs novels Roboute Guilliman: Lord of Ultramar and Vulkan: Lord of Drakes.

For Warhammer 40,000 he has written Warlord: Fury of the God-Machine, the Yarrick series, and several stories involving the Grey Knights, as well as titles for The Beast Arises and the Space Marine Battles series.

For Warhammer Age of Sigmar he has written Neferata: Mortarch of Blood and Neferata: The Dominion of Bones. David lectures at a Canadian university, on subjects ranging from English literature to horror films and video games.

John French is the author of several Horus Heresy stories including the novels The Solar War, Praetorian of Dorn, Tallarn and Slaves to Darkness, the novella The Crimson Fist, and the audio dramas Dark Compliance, Templar and Warmaster. For Warhammer 40,000 he has written Resurrection, Incarnation and Divination for The Horusian Wars and three tie-in audio dramas – the Scribe award-winning Agent of the Throne: Blood and Lies, as well as Agent of the Throne: Truth and Dreams and Agent of the Throne: Ashes and Oaths. John has also written the Ahriman series and many short stories.

Dan Abnett has written over fifty novels, including Anarch, the latest instalment in the acclaimed Gaunt’s Ghosts series. He has also written the Ravenor and Eisenhorn books, the most recent of which is The Magos.

For the Horus Heresy, he is the author of Horus Rising, Legion, The Unremembered Empire, Know No Fear and Prospero Burns, the last two of which were both New York Times bestsellers.

He also script ed Macragge’s Honour, the first Horus Heresy graphic novel, as well as numerous audio dramas and short stories set in the Warhammer 40,000 and Warhammer universes. He lives and works in Maidstone, Kent.

Chris Wraight is the author of the Horus Heresy novels Scars and The Path of Heaven, the Primarchs novels Leman Russ: The Great Wolf and Jaghatai Khan: Warhawk of Chogoris, the novellas Brotherhood of the Storm and Wolf King, and the audio drama The Sigillite.

Additionally, he has many Warhammer novels to his name, including the Warhammer Chronicles novel Master of Dragons, which forms part of the War of Vengeance series. Chris lives and works in Bradford-on-Avon, in south-west England.

Nick Kyme is the author of the Horus Heresy novels Old Earth, Deathfire, Vulkan Lives and Sons of the Forge, the novellas Promethean Sun and Scorched Earth, and the audio dramas Red-Marked, Censure and Nightfane.

His novella Feat of Iron was a New York Times bestseller in the Horus Heresy collection, The Primarchs. Nick is well known for his popular Salamanders novels, including Rebirth, the Sicarius novels Damnos and Knights of Macragge, and numerous short stories.

He has also written fiction set in the world of Warhammer, most notably the Warhammer Chronicles novel The Great Betrayal and the Age of Sigmar story 'Borne by the Storm', included in the novel War Storm.

More recently he has scripted the Age of Sigmar audio drama The Imprecations of Daemons. He lives and works in Nottingham.

Be the first to review Shattered Legions. 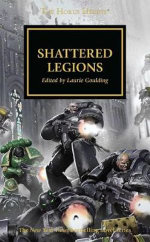 by Gav Thorpe, Guy Haley,  David Annandale and others

Science fiction Short stories Fantasy
Hold on while we process your request.