by Carlos Pacheco and Humberto Ramos

High-tech weapons. High-stakes missions. High-octane adventure! For the men and women of S.H.I.E.L.D., it's just another day in the field! Special Agent Phil Coulson brings together the best and the brightest, the gifted and the elite, normal people and superhumans from across the Marvel Universe on an as-needed basis to confront, combat and curtail dangers beyond the scope of any conventional peace-keeping force! Welcome to Level Eight. Welcome to S.H.I.E.L.D. Collecting S.H.I.E.L.D. Vol.3 #1-5 (subject to change). 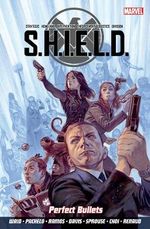 by Carlos Pacheco and Humberto Ramos