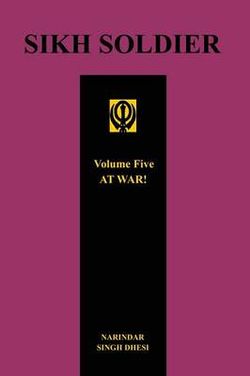 Indians have been particularly known to lack a sense of history and it was always the foreign powers who systematically recorded history but obviously from their point of view and leaving big voids. So where was the history of the Sikhs? No-one had really chronicled and documented the history, valour and sacrifice of the Sikhs in a consolidated form. In this book, and in four earlier ones, Mr Dhesi has admirably filled this so obvious void. This book makes compelling reading, dealing methodically, as it does, with the history of the Sikhs starting as the Punjabis of yore and morphing in to 'the Khalsa' and then on to the end of the last century. It brings out how, way back in 1710, Banda Singh Bahadur became perhaps the first to re-establish Indian rule after centuries of subjugation after a fierce battle. Sikhs led by their Gurus fought against Mughal tyranny, particularly their penchant for conversions, and finally in 1798 Ranjit Singh brought an end to the nightmare of eight centuries of foreign invasions and subjugation and allowed the rest of India to breathe in peace by setting up the first Sikh kingdom. The brave Sikhs did much in the twentieth century on battle fields around the world, during WW1, WW2 and the struggle for Indian Independence. To me, the 1897 Battle of Saragarhi is the ultimate in sacrifice and valour, where all 21 defenders were martyred, all given awards and medals for valour and Queen Victoria would go on to say "It is no exaggeration to record that the armies which possess the valiant Sikhs cannot face defeat in War." The book admirably chronicles the rise of the Sikhs and the constant universal theme of their valour and sacrifice in defence of their faith, around the world, in the armed forces of many countries they made their own and in the defence of many more. In fact their grit, determination and valour ensured many victories. Reading between the lines, the book brings out that Sikhs by nature are self-respecting, courageous and enterprising. Give a good look to their short history in the post war years and you will find that it is full of continuing sacrifices and that they have contributed immeasurably to nation-building in diverse nations, who valued them and accepted them. As far as India is concerned, if not for them, history may have been quite different. The gallant Sikhs have a record to be proud of and this book will go a long way. I came to know and had the privilege of knowing Mr. Dhesi in the course of my researching, helping him in writing some of his other books and developed the greatest admiration for him, particularly for his single minded devotion to seek the truth and record Sikh contributions for posterity. He has done all of us proud for surpassing the task at hand and bringing out this perfectly readable and well-chronicled record. This book is indeed a tribute to the author, a story born out of his love for the subject and for him this has been labour of love.Review by Vice Admiral Harinder Singh, (Retd) PVSM, AVSM Indian Navy

Be the first to review SIKH SOLDIER - AT WAR!Volume 5.