The Queens of Henry VIII

THE QUEENS OF HENRY V111- Divorced, beheaded, died, divorced, beheaded, survived- CATHERINE OF ARAGON the Catholic Spanish Princess, who suffered years of miscarriages and still births and yet failed to produce a son... She was the mother of Mary Tudor; ANNE BOLEYN, the pretty, clever, French-educated Protestant with whom Henry Vlll was madly in love.-. for a brief period. She was the mother of Elizabeth 1; JANE SEYMOUR the demure and submissive contrast to Anne Boleyn's vampish style. She died soon after giving birth to the longed-for son (Edward VI); ANNE OF CLEVES, 'the Flanders mare'- He was horrified because she was so plain and she was appalled because he was so fat... ; CATHERINE HOWARD, the flirtatious teenager whose adulteries made a fool of the ageing king; CATHERINE PARR, the shrewd Protestant bluestocking who outlived him.

Be the first to review Six Wives. 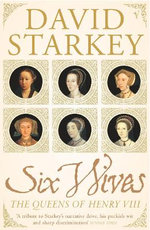