Skills of the Warramunga 1

The war is over but the peace has not begun ...

Early in 1946, former army officer, Jamie Munro, and his half-Aboriginal friend and colleague, Jack `Jacko' O'Brien, who head the Commonwealth Investigation Service in Darwin, are called on to assist in the rescue of Colonel John Cook, a senior operative of MI6, who has been kidnapped by bandits and taken into the jungles of Malaya.
Jamie and Jacko had worked in intelligence operations with Colonel Cook during the desert campaign in North Africa in the Second World War, as the Afrika Corps threatened Egypt.
With Jacko's half-sister, Sarah, a full-blood Aborigine from Tennant Creek, they arrive in Kuala Lumpur to find that they not only have to contend with the impenetrable jungle of the Malay peninsula, but also with a murderous and subversive organisation of Fascist criminals whose aim is to disrupt the creation of the Malayan Union by the British Military Authority, set to take place on 1st of April 1946, foment an uprising and take over control of the country.
All the inherent bushcraft skills of the Warramunga are needed to rescue Colonel Cook as well as prevent catastrophic mayhem on the Malayan peninsula.
This is the third book in the Warramunga trilogy. 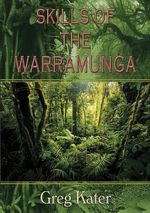 Skills of the Warramunga