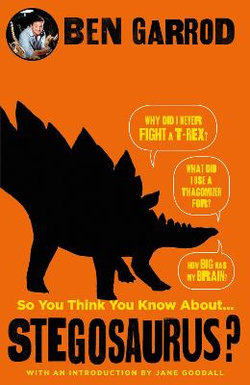 So You Think You Know About Stegosaurus?

Biologist and TV scientist Dr Ben Garrod's fun, funny, informative and collectable series of books about dinosaurs is the most up-to-date on the market. Following Tyrannosaurus Rex, Triceratops and Diplodocus, the series continues with Velociraptor, Stegosaurus and Spinosaurus.

Highly collectable and pocket-size, with an introduction by Dr Jane Goodall. Did you know that not all dinosaurs were green and scaly, some were ginger and feathered, or that they didn't all roar, they cooed like pigeons, or that the ultimate prehistoric predator was actually not a dinosaur? TV scientist, Ben Garrod, is proud to be a geek as he mixes hard science and humour to prove that science is for everyone.

He broadcasts regularly on TV and radio and is trustee and ambassador to a number of key wildlife organisations.

So You Think You Know about Dinosaurs? is his debut series.

Be the first to review So You Think You Know About Stegosaurus?.

So You Think You Know About Stegosaurus?