So You're Going to be a Dad: 20th Anniversary Edition

Hands-on, inspiring - and funny - this Aussie classic is the bottomline for new dads on pregnancy, birth, newborns and young children.

Dr Peter Downey knows babies and kids, and his best-selling book - now in this 20th-year anniversary edition - helps first-time dads prepare for what's coming their way...with a grain of salt and a smile on their face.

Fully revised and updated, he explores the joys and trials of new parenting, including:

Living with a baby in your house;

The gear you need...and the gear you don't; Navigating the online parenting world;

Lots of stuff about sex;

And more importantly, how to be a switched-on dad in the 21st century.

Topped off with a glossary of handy words new dads need to know (and some they don't), as well as words of wisdom from other ordinary fathers, So You're Going to Be a Dad remains the most engaging, reassuring and down-to-earth book for new dads around.

Peter Downey is an author, father of three, and teacher of high-school English in Australia.

Be the first to review So You're Going to be a Dad: 20th Anniversary Edition. 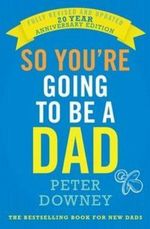 So You're Going to be a Dad: 20th Anniversary Edition