Be the first to write a review
Tweet
12%
OFF RRP  $48.99 $43.25
A modern master of suspense, critically acclaimed author Charlie Donlea returns with a taut, gripping novel about the deadly secrets hiding in plain sight . . . The truth is easy to miss, even when it's right in front of us. As a forensic reconstructionist, Rory Moore sheds light on cold-case homicides by piecing together crime scene details others fail to see. Cleaning out her late father's law office a week after his burial, she receives a call that plunges her into a decades-old case come to life once more.

In the summer of 1979, five Chicago women went missing. The predator, nicknamed The Thief, left no bodies and no clues behind--until police received a package from a mysterious woman named Angela Mitchell, whose unorthodox investigation skills appear to have led to his identity. But before they could question her, Angela disappeared. Forty years later, The Thief is about to be paroled for Angela's murder--the only crime the DA could pin on him. But the cryptic file Rory finds in her father's law office suggests there is more to the case, and Angela Mitchell, than what was fed to the public, the details of which have been buried for four decades.

Rory's talents are tested as she begins reconstructing Angela's last days. Making one startling discovery after another, Rory becomes helplessly entangled in the enigma of Angela Mitchell and what happened to her. Drawing connections between the past and present, Rory uncovers dark truths about the reclusive victim, her father, and the man called The Thief that send her down a twisting trail where things may not be as they appear. As she continues to dig, even Rory can't be prepared for the full, terrifying truth that is emerging . . .

Charlie Donlea is a USA Today bestselling author who has been praised as a 'bold new writer...on his way to becoming a major figure in the world of suspense' (Publishers Weekly).

He was born and raised in Chicago, where he continues to live with his wife and two young children. He is the author of three novels: Summit Lake, The Girl Who Was Taken and Don't Believe It.

Be the first to review Some Choose Darkness. 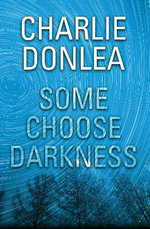