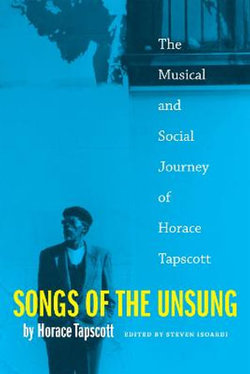 Songs of the Unsung

The Musical and Social Journey of Horace Tapscott

Songs of the Unsung is the autobiography of Los Angeles jazz musician and activist Horace Tapscott (1934-1999). A pianist who ardently believed in the power of music to connect people, Tapscott was a beloved and influential character who touched many yet has remained unknown to the majority of Americans. In addition to being "his" story, Songs of the Unsung is the story of Los Angeles's cultural and political evolution over the last half of the twentieth century, of the origins of many of the most important avant-garde musicians still on the scene today, and of a rich and varied body of music.
Tapscott's narrative covers his early life in segregated Houston, his move to California in 1943, life as a player in the Air Force band in the early fifties, and his travels with the Lionel Hampton Band. He reflects on how the Pan Afrikan Peoples Arkestra (the "Ark"), an organization he founded in 1961 to preserve and spread African and African-American music, eventually became the Union of God's Musicians and Artists Ascension--a group that not only performed musically but was active in the civil rights movement, youth education, and community programs. Songs of the Unsung also includes Tapscott's vivid descriptions of the Watts neighborhood insurrection of 1965 and the L.A. upheavals of 1992, interactions with both the Black Panthers and the L.A.P.D., his involvement in Motown's West Coast scene, the growth of his musical reputation abroad, and stories about many of his musician-activist friends, including Billy Higgins, Don Cherry, Buddy Collette, Arthur Blythe, Lawrence and Wilber Morris, Linda Hill, Elaine Brown, Stanley Crouch, and Sun Ra.
With a foreword by Steven Isoardi, a brief introduction by actor William Marshall, a full discography of Tapscott's recordings, and many fine photographs, Songs of the Unsung is the inspiring story of one of America's most unassuming twentieth-century heroes.

Be the first to review Songs of the Unsung.

Songs of the Unsung