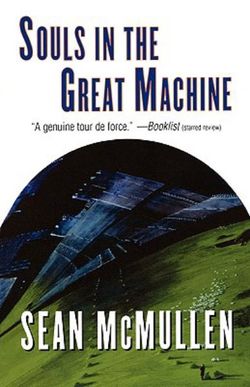 Souls in the Great Machine

by Sean McMullen and Sean Mcmullen

The great Calculor of Libris was forced to watch as Overmayor Zarvora had four of its components lined up against a wall and shot for negligence. Thereafter, its calculations were free from errors, and that was just as well-for only this strangest of calculating machines and its two thousand enslaved components could save the world from a new ice age.

And all the while a faint mirrorsun hangs in the night sky, warning of the cold to come.

In Sean McMullen's glittering, dynamic, and exotic world two millennia from now, there is no more electricity, wind engines are leading-edge technology, librarians fight duels to settle disputes, steam power is banned by every major religion, and a mysterious siren "Call" lures people to their death. Nevertheless, the brilliant and ruthless Zarvora intends to start a war in space against inconceivably ancient nuclear battle stations.

Unbeknownst to Zarvora, however, the greatest threat to humanity is neither a machine nor a force but her demented and implacable enemy Lemorel, who has resurrected an obscene and evil concept from the distant past: Total War.

Be the first to review Souls in the Great Machine. 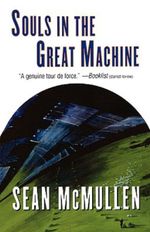 Souls in the Great Machine

by Sean McMullen and Sean Mcmullen