by Dan Slott and Humberto Ramos

Dr. Octopus was given a year to live, his body in terminal decline after a lifetime of brutal battles against Spider-Man.

So the brilliant madman used that time as you might expect. First, he mobilized an army of Octobots to take over Manhattan.

Then, he assembled six sinister villains to abduct Norman Osborn's child. Finally, he pursued Spider-Man to the ends of the Earth while threatening to burn the planet to a cinder. Each time, his ambitious plans ended in failure...or did they?

Were his defeats further proof of his madness or his genius?

With Dr. Octopus hours from death, Spider-Man is about to learn the answer, as one of his oldest enemies turns the tables on him with a dying wish that spells doom for Peter Parker and everyone he loves!

Dan Slott has built a loyal fan base by combining old-school fun with stories and characterizations friendly to new readers. Following a run on She-Hulk which combined his sly humor and encyclopedic Marvel knowledge with an imaginative take on a comic-book law firm Slott moved into the upper echelon of Marvel writers, launching Avengers: The Initiative and taking the reins on Mighty Avengers from Brian Michael Bendis.

When Marvel gave Spider-Man a fresh start in 2008, Slott was one of several rotating writers on a thrice-monthly Amazing Spider-Man. Through three years and a hundred issues, Slott became the writer most closely identified with the web-slinger's "Brand New Day" era. Amazing hit the "Big Time" when Slott took over as full-time writer, chronicling a new chapter in the life of Peter Parker with artists such as Humberto Ramos, Stefano Caselli and Marcos Martin.

Be the first to review Spider-man: Dying Wish. 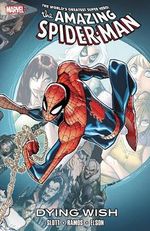 by Dan Slott and Humberto Ramos

Graphic novels: superheroes & super-villains Spiderman Batman
Hold on while we process your request.