by Roy Thomas and Howard Chaykin

This is one book no Star Wars aficionado can afford to miss In 1977, the same year the film was released, Marvel Comics launched Star Wars as a comic book. Adapted by Roy Thomas and Howard Chaykin, the comic series ignited the imaginations of countless readers across the globe, becoming part of the phenomenon that was spawned by George Lucas' smash-hit and record-breaking film The Star Wars Artisan Edition is an art book collecting more than 100 pages from the earliest stories, many from the first 10 issues, and each page has been painstakingly scanned from the original art. While appearing to be in black and white, the pages are printed in color, allowing the reader a rare glimpse of what original art looks like--complete with blue pencil notations, corrections, white-out--all the little nuances that make a page of original comic art unique. Besides Howard Chaykin, pages by comic legends Walter Simonson and Michael Golden are also included in this volume. As an added bonus, there is a beautiful foldout of Howard Chaykin's gorgeous Star Wars painting that was used to announce the film at the 1976 San Diego Comic Convention.

Roy Thomas worked for Marvel Comics between 1965 and 1980, during which time he served as writer, editor and editor-in-chief.

Having co-written two films, contributed to a number of books and co-authored one with Stan Lee, Roy is truly an expert on all things Marvel.

Be the first to review Star Wars Artisan Edition. 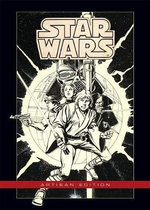 by Roy Thomas and Howard Chaykin