Play "What if?" with the original trilogy in a series of tales exploring the endless possibilities of Star Wars. How would A New Hope have gone if Luke Skywalker missed the target in his attack on the Death Star? What would have become of the Rebel Alliance if Luke perished in the icy wastelands of Hoth during The Empire Strikes Back? What if Return of the Jedi's rescue of Han Solo had gone badly wrong? And in the ultimate alternate take on the galaxy far, far away, follow Annikin Starkiller into The Star Wars in an epic based on the original draft of George Lucas' screenplay
COLLECTING: STAR WARS INFINITIES: A NEW HOPE 1-4, STAR WARS INFINITIES: THE EMPIRE STRIKES BACK 1-4, STAR WARS INFINITIES: RETURN OF THE JEDI 1-4, THE STAR WARS 0-8

Be the first to review Star Wars Epic Collection. 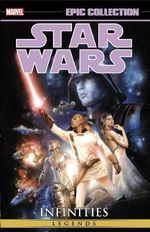