In Star Wars: Rebels, Kanan Jarrus is a cocky, sarcastic renegade fighting the Galactic Empire alongside the ragtag crew of the Ghost. But years before, during the Clone Wars, he was known as Caleb Dume, a Jedi Padawan training under Master Depa Billaba. Neither master nor apprentice ever suspected that their "loyal" Clone Troopers would turn on them upon the issuing of Order 66 - the Emperor's directive to execute all Jedi.

How did Caleb Dume escape the Jedi purge? How did he learn to survive on his own after his master fell? And how did he become the man we know as Kanan Jarrus? What can a Padawan do when being a Jedi makes him a target? Join young Caleb for a tale that bridges the years between the Clone Wars and Rebels! Collecting KANAN: THE LAST PADAWAN #1-6.

Greg Weisman (BA Stanford, MPW U.S.C.) has been a storyteller all his life. His first professional work was as an Associate Editor and Freelance Writer for DC Comics, where he worked on the Captain Atom title, among others.

Greg worked at Walt Disney Television Animation from 1989 through 1996. He rose through the ranks to become Director of Series Development for the division, working on such diverse properties as Darkwing Duck, Gummi Bears, TaleSpin, Bonkers, Raw Toonage, Duck Tales the Movie, Aladdin the Series and The Mighty Ducks, among others.

Be the first to review Star Wars: Kanan: the Last Padawan Vol. 1. 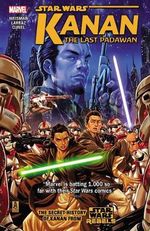