On the desert world of Jedha, Baze Malbus and Chirrut #65533;mwe were once Guardians of the Whills, who looked after the Kyber Temple and the devoted pilgrims who worshipped there. Then the Empire came and took over the planet. The temple was destroyed and the people scattered.

Now Baze and Chirrut do what they can to resist the Empire and protect the people of Jedha -- but it never seems to be enough. When a man named Saw Gerrera arrives, with a militia of his own and grand plans to take down the Empire, it seems like the perfect way for Baze and Chirrut to make a real difference. But will it come at too great a cost?

An exciting adventure about two of the brave heroes from the smash hit movie Rogue One: A Star Wars Story!

Set before Star Wars: A New Hope, Rogue One follows a rag-tag group of rebel commandos who must steal the plans to the Empire's new superweapon, the Death Star. This standalone story transports fans to unseen corners of theStar Wars universe and strange new planets not to mention an encounter with a familiar adversary, Darth Vader.

Have you collected all the Rogue One: A Star Wars Story Books?

Rogue One Book and Model: Make Your Own U-wing

Rogue One: Art of Colouring

Rogue One: Profiles and Poster Book

Greg Rucka is a novelist whose work on Batman brought fresh attention to the character and to the inhabitants of Gotham City. He won the Eisner Award for Best Story with GOTHAM CENTRAL's "Half a Life."

His other DC credits include ACTION COMICS, ADVENTURES OF SUPERMAN, WONDER WOMAN, the new Batwoman adventures in DETECTIVE COMICS and SUPERMAN- WORLD OF NEW KRYPTON.

He was one of the co-writers of DC's weekly series 52. As a novelist, Rucka has nearly a dozen books to his credit, including the recent Walking Dead (Bantam).

Be the first to review Star Wars Rogue One Character Backstory Novel. 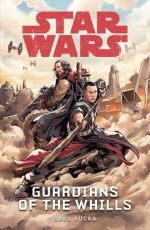