Mythos Terror in the Age of Steam

by Carrie Cuinn, Leigh Kimmel,  Robert Neilson and others

"We live on a placid island of ignorance in the midst of black seas of infinity, and it was not meant that we should voyage far. The sciences, each straining in its own direction, have hitherto harmed us little; but some day the piecing together of dissociated knowledge will open up such terrifying vistas of reality, and of our frightful position therein, that we shall either go mad from the revelation or flee from the deadly light into the peace and safety of a new dark age."

So said H.P. Lovecraft in the first chapter of his most famous story, "The Call of Cthulhu" (1926). This is also the perfect introduction to Steampunk Cthulhu, for within these stories mankind has indeed voyaged too far, and scientific innovations have opened terrifying vistas of reality, with insanity and worse as the only reward.

The Steampunk genre has always incorporated elements of science fiction, fantasy, horror and alternative history, and certainly the Cthulhu Mythos has not been a stranger to Steampunk. But until now there has never been a Steampunk Cthulhu collection, so here are 18 tales unbound from the tethers of mere airships, goggles, clockwork, and tightly bound corsets; stories of horror, sci-fi, fantasy and alternative realities tainted with the Lovecraftian and the Cthulhu Mythos. Here you will discover Victorian Britain, the Wild West era United States, and many other varied locations filled with anachronistic and sometimes alien technology, airships, submersibles and Babbage engines. But the Victorian era here is not only one of innovation and exploration, but of destruction and dread.

Josh Reynolds is the author of the Horus Heresy Primarchs novel Fulgrim: The Palatine Phoenix, and two audio dramas featuring the Blackshields: The False War and The Red Fief. His Warhammer 40,000 work includes Lukas the Trickster and the Fabius Bile novels Primogenitor and Clonelord.

He has written many stories set in the Age of Sigmar, including the novels Shadespire: The Mirrored City, Soul Wars, Eight Lamentations: Spear of Shadows, the Hallowed Knights novels Plague Garden and Black Pyramid, and Nagash: The Undying King. His tales of the Warhammer old world include The Return of Nagash and The Lord of the End Times, and two Gotrek & Felix novels. He lives and works in Sheffield.

Be the first to review Steampunk Cthulhu. 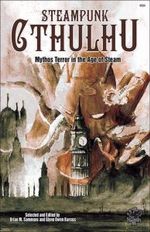 by Carrie Cuinn, Leigh Kimmel,  Robert Neilson and others