Their love knows no limits - but the further you go, the more dangers there are. Love becomes obsession and lust becomes control.

A riveting thriller in the tradition of Gone Girl and Before I Go to Sleep.

World-famous freediver Storm Hisray hits Grace Cain like a bolt from the blue. Instantly smitten, she abandons her life in the city to follow him to his idyllic Pacific island. There he teaches Grace the ways of the deep, and she learns to sink to unimaginable depths on one single breath. As their world narrows to the two of them, she learns, too, the exquisite pleasures of her body – but also that Storm hides as many secrets as the sea.

As he pushes Grace further and further beyond her limits – both in and out of the water – her resistance grows, but so does Storm’s need to control her. With a secret of her own to protect, Grace starts to realise that she is in deeper and more dangerous water than she has ever imagined possible.

Brilliant, mesmerising, incendiary and haunting, Storm and Grace explores the dazzling thrill of the deep, and the terrors that lie in its shadows.

‘Heyman has crafted a remarkable novel that compresses and concentrates its power before exploding with a terrible, urgent truth: love and death, the closer they get to the bottom of the ocean, are inseparable. Read it and you will not forget it.’ - Malcolm Knox, author of The Wonder Lover

‘… took my breath away: the poetry of its sentences; the sensory richness of its moments; the depths and turns of its story … beguiling and brutal.’ - Ashley Hay, author of The Railwayman’s Wife

Kathryn Heyman is the author of five novels, including Floodline, The Accomplice and Captain Starlight's Apprentice, published internationally and in translation.

She has received an Arts Council of England Writer's Award, the Wingate and the Southern Arts Awards, and been nominated for the Orange Prize for Fiction, the Scottish Writer of the Year Award, the Edinburgh Fringe Critics' Award, the Kibble Literary Award, and the West Australian Premier's Book Awards.

She has written several radio plays for BBC radio, including adaptations of her own work and is the director of the Australian Writers Mentoring Program.

Be the first to review Storm and Grace. 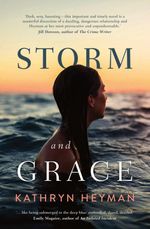