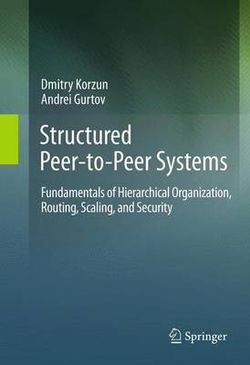 The field of structured P2P systems has seen fast growth upon the introduction of Distributed Hash Tables (DHTs) in the early 2000s. The first proposals, including Chord, Pastry, Tapestry, were gradually improved to cope with scalability, locality and security issues. By utilizing the processing and bandwidth resources&nbsp; of end users, the P2P approach enables high performance of data distribution which is hard to achieve with traditional client-server architectures. The P2P computing community is also being actively utilized for software updates to the Internet, P2PSIP VoIP, video-on-demand, and distributed backups. The recent introduction of the identifier-locator split proposal for future Internet architectures poses another important application for DHTs, namely mapping between host permanent identity and changing IP address. The growing complexity and scale of modern P2P systems requires the introduction of hierarchy and intelligence in routing of requests.

Structured Peer-to-Peer Systems &nbsp;covers fundamental issues in organization, optimization, and tradeoffs of present large-scale structured P2P systems, as well as, provides principles, analytical models, and simulation methods applicable in designing future systems. Part I presents the state-of-the-art of structured P2P systems, popular DHT topologies and protocols, and the design challenges for efficient P2P network topology organization, routing, scalability, and security. Part II shows that local strategies with limited knowledge per peer provide the highest scalability level subject to reasonable performance and security constraints. Although the strategies are local, their efficiency is due to elements of hierarchical organization, which appear in many DHT designs that traditionally are considered as flat ones. Part III describes methods to gradually enhance the local view limit when a peer is capable to operate with larger knowledge, still partial, about the entire system. These methods were formed in the evolution of hierarchical organization from flat DHT networks to hierarchical DHT architectures, look-ahead routing, and topology-aware ranking. Part IV highlights some known P2P-based experimental systems and commercial applications in the modern Internet. The discussion clarifies the importance of P2P technology for building present and future Internet systems.

Be the first to review Structured Peer-To-Peer Systems.

by Andrei Gurtov and Dmitry Korzun