Studying Talk to Her

Be the first to write a review
Tweet
RRP  $27.99 $26.25
Talk to Her (2002) is a hugely rich and interesting though ambiguous film that met with both popular success and critical acclaim. The film won an Oscar for best original screenplay and has been hailed by some critics as Pedro Almod var's masterpiece. Yet like most of Almod var's films, little is clear cut. The characters are complex and our affinity and empathy for them shifts throughout the film. In Studying Talk to Her, Emily Hughes provides an in-depth analysis of both the formal elements of the film (its narrative, genre, and auteur study) and the themes and issues it raises, discussing the social context of modern Spain and its old, traditional iconography; shifting attitudes towards gender; and, crucially, the film's uneasy, morally ambiguous depiction of rape and the spectator's reaction to it.

Be the first to review Studying Talk to Her. 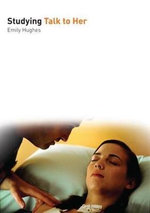 Studying Talk to Her