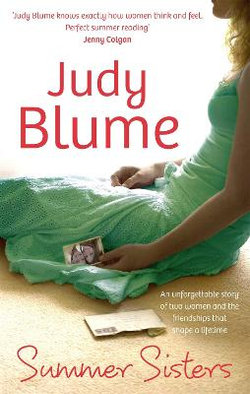 For a moment it's as if they've never been apart. They're still Vixen and Cassandra, summer sisters forever. The rest is a mistake, a crazy joke.'

Vix Leonard is twelve when she meets dazzling, reckless Caitlin Somers. Invited to spend holidays on Martha's Vineyard with Caitlin and her eccentric, mysterious family, Vix is welcomed into a life totally unlike her own. As days of bold adventure give way to nights of shy discovery, she and Caitlin come together in the complications of growing up; the refuge of belonging; the pact to Never Be Ordinary . . . Until one devastating summer when a local boy changes everything.

Years later life has driven them apart, but the bruise of their friendship remains. When Caitlin begs Vix to return to the Vineyard for her wedding, Vix knows she will go. She wants to understand what happened that last shattering summer - and why her best friend still has the power to break her heart.

For several decades Judy Blume has been winning legions of fans around the world with her stories.

More than eighty-two million copies of her books have been sold, and her work has been translated into thirty-two languages. She receives thousands of letters every month from readers of all ages who share their feelings and concerns with her.

Her much-loved books include Tiger Eyes, Are You There God? It's Me, Margaret, as well as adult novels Wifey, Smart Women and In the Unlikely Event. Judy lives in Key West, Florida, and New York City with her husband.

Be the first to review Summer Sisters.