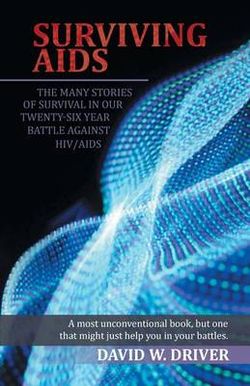 Surviving AIDS involves making all the right moves--and even then, your life is at risk.

David W. Driver knows that well: two years after getting married to his wife, Kari-Ann, he discovered that not only did she have HIV, but she was suffering from full-blown AIDS.

The disease came on quickly. First, she began to experience numbness in her right hand, fingers, and mouth--and then the numbness spread to her entire right arm. Shortly after being diagnosed she came down with pneumonia, usually a very deadly illness in the AIDS community, but she left the hospital a relatively healthy woman. Then came the PML decease that took her life while she was at home.

David was relieved when his blood test for HIV came back negative, but his young daughter, Jordyn, was not so lucky. She was diagnosed as having the HIV virus and was expected to live only several more years.

Twenty-six years later, Jordyn is enjoying the best health she has ever had thanks to the proper medical treatment.

Join David as he shares a scary and inspirational story of survival that can help others going through a similar journey.

Be the first to review Surviving AIDS.