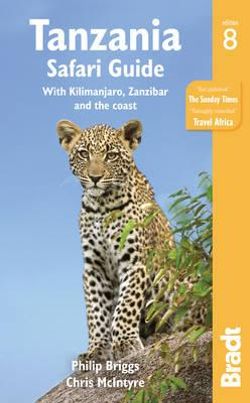 With Kilimanjaro, Zanzibar and the Coast

This new, thoroughly updated eighth edition remains the only practical guidebook to Tanzania to reflect the overall shift of tourism away from backpackers and budget camping safaris to upper-end and mid-range safaris and beach holidays.

Unlike other guidebooks, the main focus is background and practical information on Tanzania’s peerless collection of national parks, game reserves and other safari destinations. With most other guides still focusing on the ever-diminishing backpacker market, the Bradt guide cuts out the parts that are only of interest to backpackers on trans-Africa trips to allow maximum space for detailed information aimed at safari-goers and other tourists.

Philip Briggs has been exploring the highways, byways and backwaters of Africa since 1986, when he spent several months backpacking on a shoestring from Nairobi to Cape Town. In 1991, he wrote the Bradt Guide to South Africa, the first such guidebook to be published internationally after the release of Nelson Mandela.

Over the rest of the 1990s, Philip wrote a series of pioneering Bradt travel guides to destinations that were then - and in some cases still are - otherwise practically uncharted by the travel publishing industry. These included the first dedicated guidebooks to Tanzania, Uganda, Ethiopia, Malawi, Mozambique, Ghana and Rwanda, all now in their fifth to seventh editions.

More recently, he authored the first dedicated English-language guidebooks to Somaliland and Suriname, as well as a new guide to The Gambia, all published by Bradt.

Also a prolific writer for magazines, he spends at least four months on the road every year, usually accompanied by his wife, the travel photographer Ariadne Van Zandbergen, and spends his rest of the time battering away at a keyboard in the sleepy South African coastal village of Wilderness.

Chris McIntyre went to Africa in 1987, after reading Physics at Queen's College, Oxford. He taught with VSO in Zimbabwe for almost three years and travelled extensively, before writing his first guidebook in 1990.

He has since written all Bradt's guides on Namibia, Botswana and Zambia - and co-authored (with his wife, Susan) the last four editions of Bradt's Zanzibar guide - the latest of which was thoroughly revised at the same time as this book.

Chris now runs the specialist tour operator ExpertAfrica, where he leads a team of dedicated Africa addicts who provide impartial advice and organise great safaris to Africa, including Tanzania.

Be the first to review Tanzania Safari Guide.

by Philip Briggs and Chris McIntyre