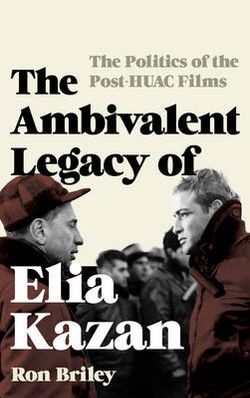 The Ambivalent Legacy of Elia Kazan

The Politics of the Post-HUAC Films

Elia Kazan first made a name for himself on the Broadway stage, directing productions of such classics as The Skin of Our Teeth, Death of Salesman, and A Streetcar Named Desire. His venture to Hollywood was no less successful. He won an Oscar for only his second film, Gentleman's Agreement, and his screen version of Streetcar has been hailed as one of the great film adaptations of a staged work. But in 1952, Kazan's stature was compromised when he was called to testify before the House Un-American Activities Committee (HUAC). Kazan's decision to name names allowed him to continue his filmmaking career, but at what price to him and the Hollywood community? In The Ambivalent Legacy of Elia Kazan: The Politics of the Post HUAC Films, Ron Briley looks at the work of this unquestionable master of cinema whose testimony against former friends and associates influenced his body of work. By closely examining the films Kazan helmed between 1953 and 1976, Briley suggests that the director's work during this period reflected his ongoing leftist and progressive political orientation. The films scrutinized in this book include Viva Zapata , East of Eden, A Face in the Crowd, Splendor in the Grass, America America, The Last Tycoon, and most notably, On the Waterfront, which many critics interpret as an effort to justify his HUAC testimony. In 1999, Kazan was awarded an honorary Oscar that caused considerable division within the Hollywood community, highlighting the lingering effects of the director's testimony. The blacklist had a lasting impact on those who were named and those who did the naming, and the controversy of the HUAC hearings still resonates today. The Ambivalent Legacy of Elia Kazan will be of interest to historians of postwar America, cinema scholars, and movie fans who want to revisit some of the director's most significant films in a new light.

Be the first to review The Ambivalent Legacy of Elia Kazan.

The Ambivalent Legacy of Elia Kazan