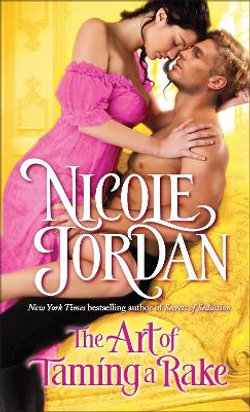 The Art Of Taming A Rake

Sparks abound in this sizzling new Legendary Lovers tale from New York Times bestselling author Nicole Jordan, in which a seductive rakehell must woo his spirited but love-shy bride while unmasking a mysterious assailant.

Despite his notorious reputation, Quinn Wilde, Earl of Traherne, has mostly honorable intentions. So when beautiful Venetia Stratham boldly enters a gentlemen's club, demanding that Quinn stop courting her sister, he does what any bachelor would do: He kisses her. With her sharp wit, intoxicating passion, and surprising vulnerability, Venetia is irresistible—except for all this nonsense about threatening to shoot Quinn. But when clandestine enemies make an actual attempt on the earl's life, Venetia is implicated. To save her good name, Quinn does what any true gentleman must do: He proposes.

Thus Venetia finds herself wed to arrogant, wickedly sensual Quinn, whose devilish ways are as legendary as his rumored skills as a lover. Yet vexingly, her body rebels against her vow to remain immune to his many charms. If only she could reform the infuriating nobleman—without diminishing his undeniable allure. As Venetia discovers that a true rake is hard to tame, Quinn faces an even greater challenge: winning his wife's fragile trust . . . while defending both their lives

About the Author
Nicole Jordan is the New York Times bestselling author of seventeen historical romances including, the Regency-set TO Pleasure A LADY, TO BED A BEAUTY, TO SEDUCE A BRIDE, TO ROMANCE A CHARMING ROGUE, TO TAME A DANGEROUS LORD and TO Desire A WICKED DUKE, as well as the Medieval romance, THE WARRIOR. She recently moved with her real-life hero to the Rocky Mountains of Utah.

Be the first to review The Art Of Taming A Rake.

The Art Of Taming A Rake