A memoir of great art, legendary collectors and record-breaking auctions

Simon de Pury is the art world's ultimate insider. His roles have included curator of the world-famous Thyssen-Bornemisza Collection, Chairman of Sotheby's Europe, and founder and owner of Sotheby's rival Phillips de Pury. His exuberant style, showmanship and iconoclasm in a highly conservative profession saw him described as 'the Mick Jagger of auctions'.

His memoir of a life lived within the world's greatest collections and auction houses is a truly eye-opening insight into the highest reaches of art, where movie stars, musicians and athletes compete with hedge funders and billionaires to fuel record-breaking prices. Throughout this compelling and revealing journey into a world discretely hidden to all but a few insiders, Simon's passion for art in all its forms, and his extraordinary depth of knowledge shine through.

About the Author:
Simon de Pury is the former Chairman of Sotheby's Europe and the former owner and co-founder of Phillips de Pury. He co-hosted Bravo's series 'Work of Art', and has written for numerous publications, including The Daily Beast. He is currently a London-based dealer and adviser to great collectors around the world.

Be the first to review The Auctioneer. 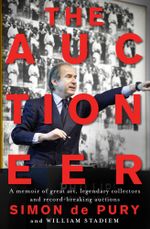 Biography & True Stories Father's Day Bargains
Hold on while we process your request.