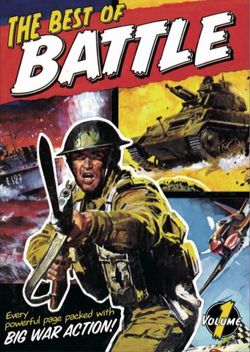 by Titan Books, Pat Mills,  John Cooper and others

A product of the same keen editorial minds that revolutionised British comics with Action and 2000 AD, "Battle" is the greatest British war comic ever published!Now, episodes of "Battle's" most famous and acclaimed stories are reprinted in this value-packed bumper volume! Over 300 pages of relentless action are collected here, from the desperate dogfights of Johnny Red to the down-and-dirty Rat Pack, the reflective, critically acclaimed Charley's War and the uncompromising Hellman of Hammer Force!Created and drawn by some of the biggest names in British comics, including Pat Mills and John Wagner (co-creators of "2000 AD"), Joe Colquhoun ("Charley's War", "Johnny Red") and more, this is the ultimate gift for fans of blazing battle action!First published in 1975, "Battle" was developed in secret, behind the scenes, by 'young gun' writer/editors Pat Mills and John Wagner. An immediate success, the comic continued until 1988, absorbing "Action", "Valiant" and "Action Force" along the way, often leading to the comic being temporarily re-titled.
Home to some of the finest British war stories ever told, and many of the greatest comics writers and artists of their generation, "Battle" still influences creators today! 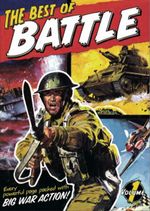 by Titan Books, Pat Mills,  John Cooper and others

Graphic novels War & combat fiction
Hold on while we process your request.