by The Betoota Advocate

A collection of the best plus a host of new material from ‘Australia's oldest newspaper', a hugely popular online satirical 'news' service

The Betoota Advocate claims to hail from the Queensland town of Betoota (pop: 0) and be Australia's oldest newspaper. Since venturing online in 2014, it has quickly become a player in online 'news' and entertainment, punching far above its weight, given not a word of it is true, and it was launched by three young blokes with not much more than a laptop and a distinctively larrikin Aussie humour.

Several of its so-called 'news' stories have been reported as fact by major news services, including Channel Nine, which reran the story of a parking policeman who booked himself, and radio 4BC, which re-reported the story of 78-year-old Reg 'Slim' Flynn, a former prize fighter who took out three would-be home invaders.

Now it's time to bring together the Betoota's best stories with a host of new material, including news, sport, human interest, crosswords - even the classifieds - in an inhale-on-Christmas-day-and-make-your-drunk-uncle-laugh collection.

The Betoota Advocate is edited by former News of the World deputy editor and first-generation Betootan, Errol Parker (Editor-at-large) and the homegrown Clancy Overell (Editor), making for a trustworthy newspaper that will never be hamstrung by editorial standards.

Be the first to review The Betoota Advocate Round-up. 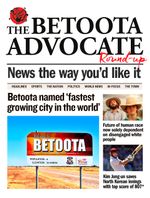 by The Betoota Advocate