The Book of Unwritten Rules

They tie our lives together. The only way to learn them is by getting them wrong. But just because they're not written down doesn't mean you won't be judged by them. Welcome to the anthology of stories where hidden forces are at play. Welcome to The Book of Unwritten Rules... would you have known them? The authors met on the Curtis Brown Creative novel-writing course in 2011. This is their first short-story collection.

Kate Hamer grew up in the West Country and Wales. She studied art and worked for a number of years in television. In 2011 she won the Rhys Davies short-story prize and her short stories have appeared in various collections.

Her debut novel The Girl in the Red Coat was published in 2015. It was shortlisted for the Costa First Novel Prize, the British Book Industry Awards Debut Fiction Book of the Year, the John Creasey (New Blood) Dagger, and the Wales Book of the Year.

It was a Sunday Times bestseller and has been translated into sixteen different languages. Kate now lives with her husband in Cardiff.

Be the first to review The Book of Unwritten Rules. 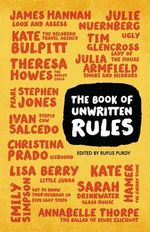 The Book of Unwritten Rules