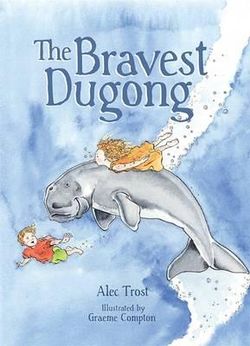 Brave Charlie D is a dugong who lives in Australian waters with his large family. One day he bids goodbye to all his relatives, and sets off on an adventure to discover new worlds and learn new skills - the most courageous dugong of them all! A picture book told in rhyme.

Graeme Compton is a visual artist and illustrator. He was born in Narrabri, North-West NSW, Australia. He has loved drawing since childhood. He works from home and has a busy practice, completing commissions for portraiture and illustrations for childrens books.

He has twice been a finalist for portraiture in the Mortimer Prize for Realism (2011-2012) and received the Grand Champion award for his work Egret on Tap in the Gunnedah Art Exhibition 2013. From 2013 he began illustrating childrens books and has produced numerous pictures for authors, filling twelve books by early 2017.

Graeme completes portraits in between illustrations. He is currently working on the sketches for an exhibition of his fantasy works, including dragons, phoenixes, demons and other beasties.

Be the first to review The Bravest Dugong.

by Alec Trost and Graeme Compton