Rise of a Young Slugger

Bryce Harper's unprecedented ascent to the major leagues, from a 17-year-old first overall draft pick to a headline-creating, 19-year-old rookie center fielder for the Washington Nationals, dropped him into the middle of the best season of D.C. baseball since the Great Depression. Washington Post sports reporters chronicled each moment on and off the field, from his first press conference in Washington, to watching him wash dishes after dinner at his parents' house, to his debut at Dodger Stadium. Nowhere was his journey detailed better than in these collected stories from the Post. No one had ever seen a player like Bryce Harper before, and perhaps never had a rookie lived up so completely to his billing.

This newly updated audiobook from The Washington Post has the stories and the jaw-dropping achievements as covered by The Post, whose sports journalists have been there for the entire ride. Get your story of a legend today.

Be the first to review The Bryce Harper Story. 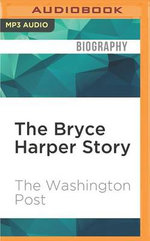