The Club, Volume 1 [the Club

Be the first to review The Club. 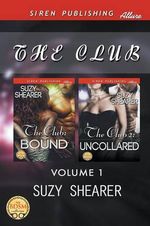 The Club, Volume 1 [the Club