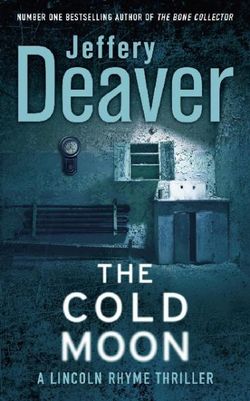 It's the night of the full Cold Moon - the month of December according to the lunar calendar. A young man is found dead in lower Manhattan, the first in a series of victims of a man calling himself the Watchmaker. This killer's obsession with time drives him to plan the murders with the precision of fine timepieces, and the victims die prolonged deaths while an eerie clock ticks away their last minutes on earth. Lincoln Rhyme, Amelia Sachs and the rest of the crew are tapped to handle the case and stop the Watchmaker and his partner, Vincent Reynolds, a repulsive character with a special interest in the female victims of the killer. Amelia is not only Lincoln's eyes and ears at crime scenes on the Watchmaker case, but she's now running her own homicide investigation-her first case as lead detective. The policewoman's unwavering efforts in pursuing the killers of a businessman, who left behind a wife and son, sets into motion clockwork gears of its own, with consequences reaching to people and events that will endanger not only many lives but Lincoln's and Amelia's future together.

Jeffery Deaver is the award-winning author of 32 internationally bestselling novels, including the 2011 James Bond novel Carte Blanche, and three collections of short stories. He is best known for his Lincoln Rhyme thrillers, which include the number one bestsellers The Vanished Man, The Twelfth Card and The Cold Moon, as well as The Bone Collector which was made into a feature film starring Denzel Washington and Angelina Jolie.

The first Kathryn Dance novel, The Sleeping Doll, was published in 2007 to enormous acclaim. A three-time recipient of the Ellery Queen Reader's Award for Best Short Story of the year, he has been nominated for an Anthony Award and six Edgar Awards from the Mystery Writers of America.

He won the WHSmith Thumping Good Read Award in 2001 and in 2004 won the Crime Writers' Association Steel Dagger for Best Thriller with Garden of Beasts, and their Short Story Dagger for 'The Weekender' from Twisted. Jeffery Deaver lives in North Carolina.

Be the first to review The Cold Moon.