The Collected Supernatural and Weird Fiction of Nathaniel Hawthorne

Volume 2-Including One Novel 'The Marble Faun, ' and Twelve Short Stories of the

Be the first to write a review
Tweet
$72.60
This item qualifies for FREE delivery
A second helping of Nathaniel Hawthorne's bewitching stories of old New England Nathaniel Hawthorne was one of the earliest admired American novelists and short story writers. Born in Salem, Massachusetts, his origins ever influenced his work. His tales were invariably set in New England, were darkly romantic and were often concerned with the occult and witches and their works in particular. Indeed, one of Hawthorne's ancestors actually sat as a judge during the famous Salem Witch Trials, so the author's inspiration could barely have stronger foundations. Predictably Hawthorne's stories contain puritanical messages on the themes of sin, guilt and fundamental evil which go well with stories that contain uncanny and, sometimes, almost surreal elements. Although Hawthorne was decidedly popular with readers opinions about his work was sharply divided among his peers. Poe was a particularly harsh critic. Nevertheless, more recent analysis has suggested that he remains-possibly-America's greatest novelist, challenged only by Henry James and William Faulkner. This Leonaur collection of four volumes has gathered together Hawthorne's tales which contain elements of the weird and bizarre. It contains very well known works and those that may be less familiar.
Volume two contains the novel 'The Marble Faun' one of Hawthorne's most highly regarded works and twelve short stories including 'My Kinsman, Major Molineux, ' 'Old Ticonderoga, ' 'The Celestial Railroad, ' 'Snow Flakes, ' 'The Ambitious Guest' and others.
Leonaur editions are newly typeset and are not facsimiles; each title is available in softcover and hardback with dustjacket.

Nathaniel Hawthorne was born in Salem, Massachusetts, where he wrote the bulk of his masterful tales of American colonial history.

His career as a novelist began with The Scarlet Letter (1850) and also includes The house of the Seven Gables, The Blithedale Romance, and The Marble Faun.

Be the first to review The Collected Supernatural and Weird Fiction of Nathaniel Hawthorne. 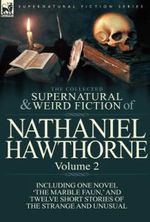 The Collected Supernatural and Weird Fiction of Nathaniel Hawthorne

Fantasy Horror & ghost stories
Hold on while we process your request.