by Harvey Kurtzman, Al Feldstein,  Bill Gaines and others

No comics publisher has had a greater impact -- or generated more controversy -- than the immensely influential EC Comics. The second and concluding volume of conversations with the creators behind the EC war/horror/science fiction/suspense line brings The Comics Journal's definitive interviews together with several never-before-published sessions, including a new interview with the legendary Jack Davis conducted by Gary Groth. It also includes:

- Publisher Bill Gaines on the origins of the company and his terrifying grilling before the Senate Subcommittee on Juvenile Delinquency.

- Editor/writer/artist Al Feldstein on introducing serious science fiction to comics and his interactions with Ray Bradbury.

- Harvey Kurtzman on bringing realism to war comics with Frontline Combat and subversive satire to humor comics with Mad.

- The master of chirascuro, Alex Toth, on the aesthetic values that guided him through a career that included drawing for EC and animating Jonny Quest.

- Colorist Marie Severin on the atmosphere of pranks and anarchy that dominated the EC bullpen.

Be the first to review The Comics Journal Library. 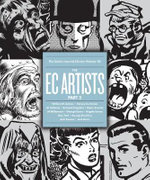 by Harvey Kurtzman, Al Feldstein,  Bill Gaines and others