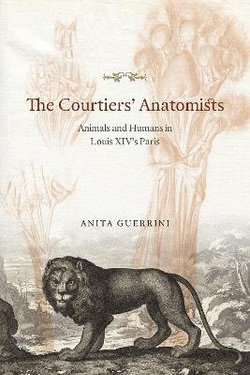 The Courtiers' Anatomists is about dead bodies and live animals in Louis XIV's Paris--and the surprising links between them. Examining the practice of seventeenth-century anatomy, Anita Guerrini reveals how anatomy and natural history were connected through animal dissection and vivisection. Driven by an insatiable curiosity, Parisian scientists, with the support of the king, dissected hundreds of animals from the royal menageries and the streets of Paris. Guerrini is the first to tell the story of Joseph-Guichard Duverney, who performed violent, riot-inducing dissections of both animal and human bodies before the king at Versailles and in front of hundreds of spectators at the King's Garden in Paris. At the Paris Academy of Sciences, meanwhile, Claude Perrault, with the help of Duverney's dissections, edited two folios in the 1670s filled with lavish illustrations by court artists of exotic royal animals. Through the stories of Duverney and Perrault, as well as those of Marin Cureau de la Chambre, Jean Pecquet, and Louis Gayant, The Courtiers' Anatomists explores the relationships between empiricism and theory, human and animal, as well as the origins of the natural history museum and the relationship between science and other cultural activities, including art, music, and literature.

Be the first to review The Courtiers' Anatomists.