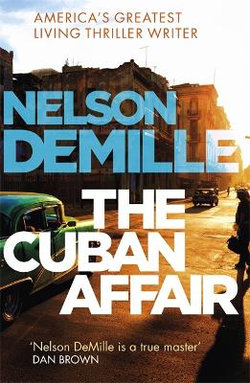 The long-awaited new novel from America's greatest living thriller writer, Nelson DeMille, moves the action on to Cuba for an adventure to be relished

Strap in for the ride of a lifetime with the blistering new novel from America's greatest living thriller writer, Nelson DeMille.

Daniel 'Mac' MacCormick has a good life. Aged thirty-five and a decorated US Army veteran, he whiles away his life in stunning Key West, Florida, running a forty-two-foot charter fishing boat The Maine. A ladies' man and rule-breaker, Mac has it all - apart from the money to hold on to his beloved boat.

Then Mac is approached by a hotshot Miami lawyer called Carlos with an apparently irresistable offer: a fee of $2 million to run the boat into Havana and smuggle out $60 million from a stash hidden from the Castro government - cash once owned by the family of a beautiful Cuban-American woman named Sara Ortega.

With the political 'Cuban Thaw' underway, it's only a matter of time before someone finds the stash. But Mac knows if he accepts this job, he'll walk away rich...or not at all.

Nelson Richard DeMille was born in New York City on August 23, 1943 to Huron and Antonia (Panzera) DeMille, then moved with his parents to Long Island. He graduated from Elmont Memorial High School, where he played football and ran track.

DeMille spent three years at Hofstra University, then joined the Army where he attended Officer Candidate School and was commissioned a Lieutenant in the United States Army (1966-69). He saw action in Vietnam as an infantry platoon leader with the First Cavalry Division and was decorated with the Air Medal, Bronze Star, and the Vietnamese Cross of Gallantry. After his discharge, DeMille returned to Hofstra University where he received his bachelor's degree in Political Science and History.

He has three children, Lauren, Alexander, and James, and he and his wife reside on Long Island. DeMille's first major novel was By the Rivers of Babylon, published in 1978, and is still in print as are all his succeeding novels. He is a member of American Mensa, The Authors Guild, and is past president of the Mystery Writers of America.

Be the first to review The Cuban Affair.