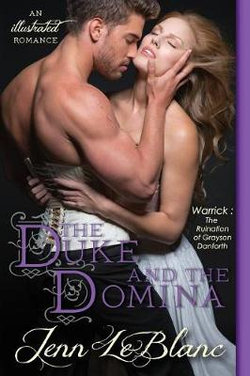 The Duke and the Domina

Warrick : the Ruination of Grayson Danforth, an Illustrated Novel

It's a marriage of Kink-venience.

The first was to be recalled from India by Queen Victoria where he worked for the quiet purposes of the crown. He must now become the Duke of Warrick after the tragic deaths of his father and brothers.

However, tragedy is entirely in the eyes of the beholder, and Grayson doesn't want the title, or to return to what remains of his family. Grayson wants to remain invisible, an outcast, a man in exile for the way his body and mind behave and the secrets he needs to keep.

The second thing he never expected was to be forced into marriage to a woman from the twenty-first century. Lulu is no mere woman, however. She's a switch who works as a professional Dominatrix--at least, she did. When she wakes up in a strange house, a strange world, a strange body, she isn't quite sure what to think and is certain she's dreaming. She has less than a day to gain her bearings and make a decision that will dictate the rest of her life in this world--whether or not to marry this beautiful stranger.

As Lulu and Grayson attempt to begin a life together, she discovers the true reason why this man is a stranger to his family.

She can only hope she can persuade Grayson to accept who she is, and who he was born to be, before he forces her out of his life in order to maintain his well-kept secrets.

Trust doesn't come easily to either of them, but it's the only thing they have.

Grayson will have to give in to his need to submit in order to get his wife to open up and allow him to possess her fully in return.

It's a cautious dance between two people who have never known how to trust, or love.

BOOKS IN THE LORDS OF TIME SERIES:

THE RAKE AND THE RECLUSE

THE DUKE AND THE BARON

THE DUKE AND THE DOMINA

THE TROUBLE WITH GRACE

THE SPARE AND THE HEIR

THE SADIST AND THE STOLEN PRINCESS

THE LADY AND HER SECRET LOVER

Be the first to review The Duke and the Domina.

The Duke and the Domina