The Extraordinary Life of a Migratory Bird

Every year around August, large flocks of Eastern Curlews leave their breeding grounds in the Arctic and embark on a perilous 10,000km journey to the coast of Australia.

The birds cannot swim; if they become exhausted and fall into the ocean, they die. But it’s a journey they have taken for tens of thousands of years, tracing invisible flyways in the sky in what is one of the most spectacular mass migrations in the animal kingdom.

Following the Eastern Curlew along its migratory path, award-winning nature writer Harry Saddler explores how these incredible birds have impressed themselves on the cultures of the countries they fly through, the threat to their survival posed by development, and the remarkable ways these birds and humankind may be entwined. The Eastern Curlew is a delightful and vivid portrait of a fascinating natural phenomenon.

‘Much like the curlew, Harry Saddler probes a rich field for morsel after tasty morsel to produce an outstanding story of a most remarkable bird.’ Sean Dooley

‘The Eastern Curlew is a marvel. Tender, wise, profound, expansive, it takes the story of an ordinary bird and reveals not just what is extraordinary about it, but also the ways in which human activity s imperilling its very existence. In a moment of profound ecological crisis we urgently need more books like it, and more writers like Harry Saddler.’ James Bradley

‘Saddler successfully conveys both the curlew’s plight and its magic. Readers will come away from this book understanding both the urgent need to conserve these wondrous birds, as well as the joys of birdwatching more generally.’ Books + Publishing Magazine

Harry Saddler is the author of We Both Know: Ten Stories About Relationships(2005) and Small Moments (2007), a short novel about the aftermath of the Canberra bushfires of 2003, both published by Ginninderra Press. In 2014 he was joint-winner of the Melbourne Writers Festival/Blurb Inc ‘Blog-to-Book Challenge’ for his blog Noticing Animals, resulting in his third book Not Birdwatching: Reflections on Noticing Animals. His nonfiction writing about the ecological, physical, and philosophical interactions between humans and animals has been published online at Meanjin and the Wheeler Centre, and in print in The Lifted Brow. He has twice been shortlisted for The Lifted Brow’s Prize for Experimental Non-fiction.

Be the first to review The Eastern Curlew. 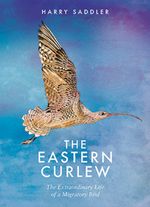 Natural history True Stories for Him
Hold on while we process your request.