From Tannenberg to the Russo-Polish War

The front in the East was much longer than in the West. The theatre of war was delimited by the Baltic Sea in the West and Moscow in the East, a distance of 1,200kms, and Saint Petersburg in the North and the Black Sea in the South, a distance of more than 1,600kms. While World War I on the Western Front developed into trench warfare, the battle lines on the Eastern Front were much more fluid; trenches never truly developed. The greater length of the front ensured that the density of soldiers in the line was lower so the line was easier to break. Once broken, the sparse communication networks made it difficult for the defender to rush reinforcements to the rupture in the line, to mount a counteroffensive and seal off a breakthrough. Also, the terrain in the Eastern European theatre was quite solid, often making it near impossible to construct anything resembling the complicated trench systems on the Western Front, which had muddier and much more workable terrain. In short, on the Eastern front the side defending did not have the overwhelming advantages it had on the Western front.
Because of this, front lines in the East kept on shifting throughout the conflict, and not just near the beginning and end of the fighting, as was the case in the West. In fact the greatest advance of the whole war was made in the East by the German Army in the summer of 1915. With the aid of numerous black and white and colour photographs, many previously unpublished, the History of World War I series recreates the battles and campaigns that raged across the surface of the globe, on land, at sea and in the air. The text is complemented by full-colour maps that guide the reader through specific actions and campaigns. 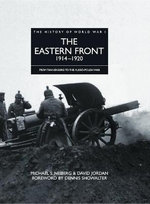