The Echo of Others 1

The Past Is Never over. She Will Make Sure of It

When a duck hunter is shot dead, the murderer leaves a clue that the crime is linked to a cold case, the long-ago deaths of two animal activists. Then a horse trainer is killed and another clue is found. Cold Case Detective Rachael Schlank is drafted onto the taskforce investigating the crimes … along with a former colleague, whose dangerous temper has already made its mark on her career.

With more victims and an eye-for-an-eye, vigilante killer on the loose, the detectives must solve the case fast. In the process, Rachael comes to understand that morality, legality and the truth are not always aligned. And that she has some hard choices to make.

The book has been described as a mixture of Gillian Flynn’s ‘Gone Girl’ and Michael Connelly’s ‘Bosch’ series.

"A compelling novel about the charged, ambiguous line between love and hate, between the desire for justice and the desire for revenge." - Kate Ryan, Winner, Writer's Prize, 2015 Melbourne Prize for Literature. “A fast-moving, thought-provoking read from a powerful and original new voice.”

“I loved this book. Fantastic plot, fast moving, great characters…could not put it down!” – US Reviewer.

“Stunning novel. Builds and builds with twists i didn’t see coming. This is a book that will really make you think differently about a lot of things. I am still thinking about it days later. Highly recommended.’ – GoodReads Review. 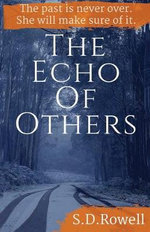 The Echo of Others

Crime & Mystery Romance
Hold on while we process your request.