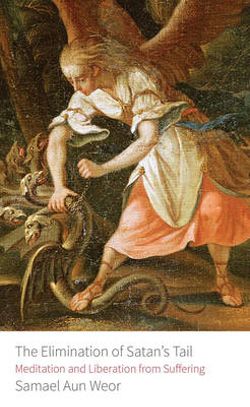 The Elimination of Satan's Tail

Meditation and Liberation from Suffering

by Samael Aun Weor
Paperback
Publication Date: 15/07/2014
Be the first to write a review
Tweet

The beginning of suffering is symbolized in the Bible by the story of Adam and Eve, who represent all the men and women of ancient times, and who lived in Eden, a Hebrew word that literally means bliss, ecstasy. Tempted by the serpent, they ate the forbidden fruit of the Tree of Knowledge, and were cast out of Eden. The serpent was also cursed and fell into disgrace, thus forming the tail of Satan, a symbol of degeneration, and the opposite of that famous healing serpent of Moses, also called kundalini. Since that time, humanity has been suffering in the wilderness, longing to find a way back to the happiness we once knew. The path to return to Eden requires that we correct the original mistake and its consequences, all of which reside within us. Since Eden represents a state of consciousness, we need a radical shift in how we use consciousness from moment to moment, and to convert the subconsciousness into consciousness, a work accomplished only by mastering the ancient science of meditation, which is explained in this book. By restoring our inner purity, we return to the primordial state of spiritual and psychological beauty that is our natural birthright, which is accompanied by serenity, joyfulness, and perception of the divine. Adam and Eve walked and talked with divine beings; we can too, if we conquer the fallen serpent with us, and return to our original state of purity."

Be the first to review The Elimination of Satan's Tail.

The Elimination of Satan's Tail