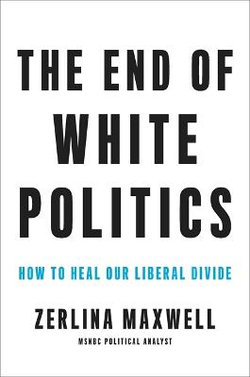 The End of White Politics

How to Heal Our Liberal Divide

In the entire history of the United States of America:We've never elected a woman as our president.We've only had one president who is not a white man. With two presidential campaigns under her belt, Barack Obama and Hillary Clinton, MSNBC's political analyst and SiriusXM Host Zerlina Maxwell gained first-hand knowledge of everything liberals are doing right--and everything they are doing wrong to make progress. Barack Obama's eight-year presidency unearthed what had always been right beneath the surface, a racism that America has struggled to leave behind. We watched as President Donald Trump effectively ran a campaign on white identity politics. He exploited race and class privileges, and successfully tapped into a white male angst. In an unvarnished, impassioned assessment, Maxwell's book lays bare, what now, liberals? In the 2020 race, with the most diverse presidential candidates of our time having run in the primary elections, THE END OF WHITE POLITICS dismantles the past and present problems of the Left--challenging the discriminatory agendas of the 'Bernie Bros' and centrist thinkers like Joe Biden--to address the liberal framework that has traditionally focused on the white working-class, specifically male. The biggest issue, Maxwell argues, is that the 'liberal-minded' party still struggles to engage communities of color, even though the population majority will be non-white by 2045. Historically public policies, even those enlisted by the Left, have valued certain people's needs over others and there remains a one-sided representation at the top. But times are changing. Ultimately, in a page-turning analysis, Maxwell skillfully examines how progressives can use factors that Trump exploited during his rise to power in 2016 to heal the liberal divide. A gradual transition of power over to those marginalized groups who haven't traditionally had one has created a shift and a growing demand for equity across all areas of American life, which is the central tension in American politics in the Trump era. Instead of turning away from identity politics, progressives can lean into it to unite in a common vision, and make progressive politics into a winning movement. Everyone post-the 2016 presidential election has shared their 'analysis' of what went wrong and what went right for liberals. Everyone is wrong but the answers are staring us right in the face.

Be the first to review The End of White Politics.

The End of White Politics