This insightful and accessible new biography of Alfred Deakin, Australia’s second prime minister, shines fresh light on one of the nation’s most significant figures. It brings out from behind the image of a worthy, bearded father of federation the gifted, passionate and intriguing man whose contributions continue to shape the contours of Australian politics.

The acclaimed political scientist Judith Brett scrutinises both Deakin’s public life and his inner life. Deakin’s private papers reveal a solitary, religious character who found distasteful much of the business of politics, with its unabashed self-interest, double-dealing, and mediocre intellectual levels. And yet politics is where Deakin chose to do his life’s work.

Destined to become a classic of biography, The Enigmatic Mr Deakin is a masterly portrait of a complex man who was instrumental in creating modern Australia.

Be the first to review The Enigmatic Mr Deakin. 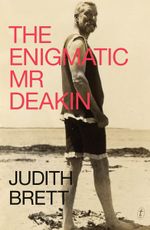