Human rights activist John Prendergast and Oscar-nominated actor Don Cheadle bring us an empowering and hopeful new book, as they reveal the steps being taken by engaged citizens--"Upstanders"--famous and unknown, here and abroad, to combat genocide, rape, and child soldierdom in Africa, and show how you can be a part of the movement.

Learn how a high school student in Chicago rallied fellow students all over his city to raise awareness of genocide... a former child soldier in Uganda formed a group of others like him to aid in reconciliation... and a mother and teacher gang-raped by soldiers in Congo found strength to help other survivors. John and Don present ways for you to form alliances, contact Congress, alert the media, enlist corporations, and use social media to become part of the solution.

Featuring testimonies and interviews with:

Be the first to review The Enough Moment. 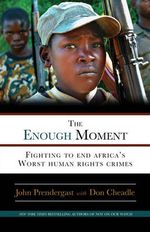 Human rights Politics & government
Hold on while we process your request.