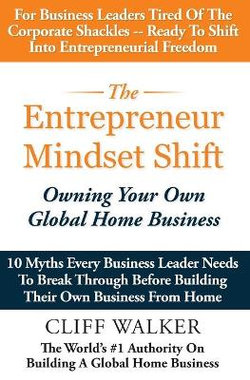 Owning Your Own Global Home Business

Cliff Walker is The World's #1 Authority on Building a Global Home Business. Having worked in corporations for over 20 years, Cliff was the epitome of success--but he still felt like a cog in the corporate machine, with little freedom or sense of ownership in his position.

Cliff had held influential positions in a number of big corporations, among them the beverage giant Diagio, which owns brands like Smirnoff, Guinness and Johnnie Walker. When he worked for them, Cliff enjoyed great salaries, benefits and bonuses, but his sense of insecurity and doubt persisted--and there was always a ceiling on his earnings.

As he considered his options, Cliff noticed that there were many business leaders who had achieved a great deal in the corporate world but felt that they weren't really building anything. Some of his successful contemporaries had learned the hard way that they were just one layoff away from having to start all over again.

While working as a management consultant, Cliff came across a business model that held some promise, but which had been abused by a lot of companies and garnered something of a bad reputation. Working the bugs out of it, Cliff discovered that the system gave him the opportunity to completely change the way he worked and to dramatically enhance his lifestyle.

Ultimately, Cliff refined his system into one that will generate a long-term sustainable business while you remain at work, creating a significant parallel income. Then, you can choose whether or not to scale into exponential growth, using your new business as your main wealth-generating vehicle.

In The Entrepreneur Mindset Shift: Owning Your Own Global Home Business, Cliff Walker reveals the processes that will enable you to plan your path toward building a secure, corporate politics and salary cap-free income!

In this groundbreaking book, you'll discover how to:

Be the first to review The Entrepreneur Mindset Shift.