The Evolution of Cyber War

Former secretary of defense Leon Panetta once described cyber warfare as "the most serious threat in the twenty-first century," capable of destroying our entire infrastructure and crippling the nation.

Already, major cyber attacks have affected countries around the world: Estonia in 2007, Georgia in 2008, Iran in 2010, and most recently the United States. As with other methods of war, cyber technology can be used not only against military forces and facilities but also against civilian targets. Information technology has enabled a new method of warfare that is proving extremely difficult to combat, let alone defeat.

And yet cyber warfare is still in its infancy, with innumerable possibilities and contingencies for how such conflicts may play out in the coming decades. Brian M. Mazanec examines the worldwide development of constraining norms for cyber war and predicts how those norms will unfold in the future. Employing case studies of other emerging-technology weapons--chemical and biological, strategic bombing, and nuclear weaponry--Mazanec expands previous understandings of norm-evolution theory, offering recommendations for U.S. policymakers and citizens alike as they grapple with the reality of cyber terrorism in our own backyard.

Be the first to review The Evolution of Cyber War. 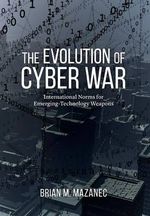 The Evolution of Cyber War