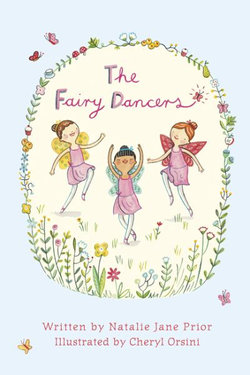 For every little girl who loves to dance, comes this lavishly illustrated storybook from award-winning Australian author Natalie Jane Prior and much-loved illustrator Cheryl Orsini.

Every Saturday, with a hop, a skip and a magical twirl, Mia, Emma and Grace turn into ... fairy dancers! Enter their enchanted world of fun, friendship, fairy wings and dancing.

Natalie Jane Prior is the author and editor of numerous books for children and young adults. Her work includes the classic picture book The Paw and its sequels (illustrated by Terry Denton), the internationally successful fantasy series Lily Quench, which has well over half a million copies in print and which was broadcast on BBC Radio in 2006, and The Minivers, a four book series published in Australia and the UK.

Her most recent picture book is Wandering Star, illustrated by Stephen Michael King. In 2018, Natalie was co-editor with her long-time agent, Margaret Connolly, of the critically acclaimed poetry anthology, A Boat of Stars, which includes new poetry and artwork by some of Australia's best known writers and illustrators - the first such anthology in many years.

Books by Natalie have won the Aurealis Award (for fantasy and science fiction), the Davitt Awards (for crime writing), have been Honour, Shortlisted and Notable Books in the Children's Book Council of Australia Awards, and have won numerous children's choice awards. She lives in Brisbane with her husband, daughter, a well-behaved border collie, and an extremely naughty dachshund.

Cheryl Orsini is the much-loved illustrator of The Fairy Dancers and The Tales of Mrs Mancini. She has illustrated more than thirty children's books and her work regularly appears in magazines and exhibitions.

by Natalie Jane Prior and Cheryl Orsini