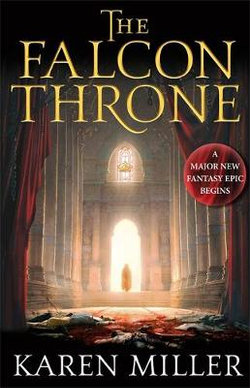 Book One of the Tarnished Crown

by Karen Miller
Hardback
Publication Date: 09/09/2014
Be the first to write a review
Tweet

EVERY CROWN IS TARNISHED BY THE BLOOD OF AMBITION.

In a divided Kingdom, some will do anything to seize the crown.

A BASTARD LORD, rising up against his tyrant cousin, sheds more blood than he bargained for.

A DUKE'S WIDOW, defending her daughter, defies the ambitious lord who'd control them both.

And TWO BROTHERS, divided by ambition, will learn the true meaning of treachery.

All of this will come to pass, and nothing will remain as it once was. Royal houses will fall, empires will be reborn, and those who seek the Falcon Throne will pay for it in blood.

WITH THE FALCON THRONE, A MAJOR NEW EPIC FANTASY BEGINS.

Be the first to review The Falcon Throne.