by Peter David, Pat Mills,  Ron Lim and others

Return to the world of 2099 Just as Alchemax prepare to power up their new floating city of Valhalla, an all-new Thor appears, determined to claim the city for his fellow Aesir. But is this a Thunder God worthy of the name? Judging by the way he's hitting on Miguel O'Hara's girlfriend, maybe not. It will take the combined efforts of Spider-Man 2099 and his future cohorts Doom, Punisher, Ravage and the X-Men to uncover the truth about these apparent Asgardians, before Thor brings the hammer down on the world of tomorrow And even if Thor doesn't, Bloodsword will. Miguel might have to take refuge in cyberspace - even though that could spell the end of his secret identity COLLECTING Spider-Man 2099 (1992) 15-22, Ravage 2099 15, X-Men 2099 5, Doom 2099 14, Punisher 2099 13

Peter David is a long-standing and highly respected comics and science-fiction writer, with over two decades of experience. He wrote The Incredible Hulk for twelve years, is the author of novel: The Incredible Hulk: What Savage Beast, and co-edited the short story collection The Ultimate Hulk. David has also worked on such titles as Supergirl, Star Trek, Wolverine, Spider-Man, Aquaman and many others. David lives in New York.

Pat Mills is one of Britain's most popular writers and comics editors, and is often credited for having revitalized the comics industry in Britain in the 1970s.

After working on several war titles, Mills developed morally ambiguous heroes including Nemesis the Warlock and the ABC Warriors. He continues to write dark science fiction series like Slaine and American Reaper, as well as several Doctor Who radio plays.

Be the first to review The Fall of the Hammer. 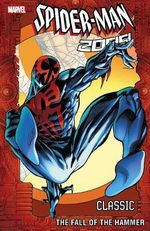 by Peter David, Pat Mills,  Ron Lim and others