by Sam Humphries and Ronan Cliquet

Be the first to write a review
Tweet
$36.25
Jessica Cruz and Simon Baz both earned their power rings, but are they ready to face the deadly legacy that accompanies them? The very first Lantern--the mad Volthoom--has returned, and his plan to regain the powers he lost billions of years ago leads straight to Earth's emerald warriors Before Jessica and Simon can return to Sector 2814 and the comforts of Earth upon completing their Green Lantern training, they must escort a Guardian of the Universe to the ancient Vault of Shadows. But when the Guardian is revealed to be a disguised Volthoom, the ensuing battle thrusts the Green Lanterns into an unexpected journey through time and space Denied their rings' full powers, how will they return home in time to defeat Volthoom? Writer Sam Humphries (John Carter, Warlord of Mars) is joined by top-flight artists Ronan Cliquet (ACTION COMICS, BATMAN & ROBIN ETERNAL), Ulises Arreola (SUPERMAN, ACTION COMICS) and others in GREEN LANTERNS VOL. 4: THE FIRST RING, collecting GREEN LANTERNS #22-26.

He has also created the critically acclaimed indie hits OUR LOVE IS REAL and SACRIFICE, the latter of which was re-released in a deluxe hardcover edition by Dark Horse Comics. He is now writing GREEN LANTERNS for DC Comics.

Be the first to review The First Rings. 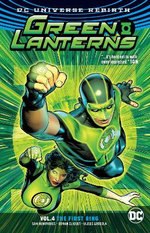 by Sam Humphries and Ronan Cliquet